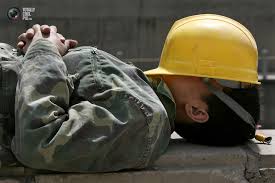 Let’s be honest. We’ve all wanted to catch a quick nap at our work once in a while. The need to curl up and catch some beauty sleep is even more intense after a heavy meal. Or in my case, everyday. However, not everyone works at a Google office which comes with bunk beds and a tranquil room for sleeping. So some people just do it as they go. And god they can really do it anywhere. Here’s some examples of people who were caught sleeping at work

1. The American Army, tall and proud caught sleeping at work 2. The Cops, ever watchful and vigilant Who will watch the watchmen? The more things change, the more they remain the same

4. Under the table dealings? Sorry, the table was being used for operations and stuff 9. And this probably isn’t in the flight safety manual