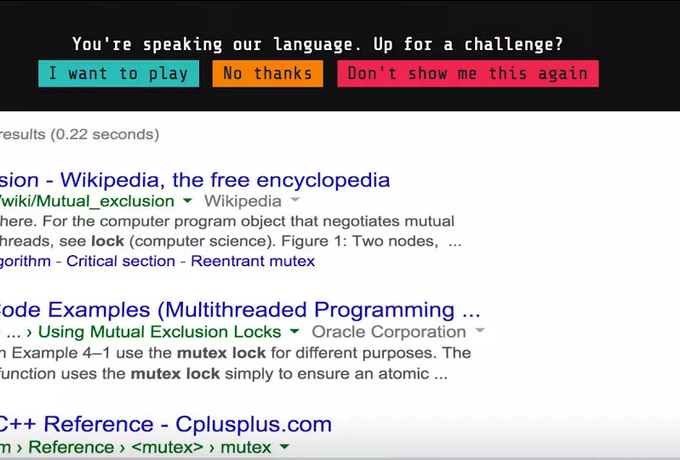 Google, as established by now is a company everyone wants to work at. Right from engineers to product managers to liberal arts graduates, it’s dream company across the board.

However, with an increasing stack of resumes waiting at Google’s HR desks, the selection process is getting increasingly tougher at this search giant. The conversation rate is 1 to a 1000 applications and the term “How to get a job at Google” clocks over a million searches per month.  That being the case, imagine Max Rossett’s delight, when a Google job landed on his lap after a mysterious and innovative challenge presented itself to Rosett.

According to Rosette’s post on The Hustle, the management graduate, wasn’t ready for a career transition just yet. He was pursuing a tech degree through an online course and doing web projects on the side.

One morning, while working on a project, I Googled “python lambda function list comprehension.” The familiar blue links appeared, and I started to look for the most relevant one.

But then something unusual happened.

The search results split and folded back to reveal a box that said “You’re speaking our language. Up for a challenge?”

I stared at the screen. What? After a moment, I decided yes, I was most definitely up for a challenge. Rosett clicked through and landed on a page that called itself “foo.bar.” The page resembled a UNIX interface, so he typed the command to see the list of files. There was a single one called “start_here.txt”. He opened it and saw two sentences:

“Type request to request a challenge. Type help for a list of commands.”

He typed “request” and half expected to see “Follow the white rabbit, Max.” Instead, the screen displayed a paragraph outlining a programming challenge and gave instructions on how to submit the solution. Rosett had 48 hours to solve it, and the timer was ticking. Rosett has refrained from posting the problem due to NDA agreements, but admits that solving it required a bit of knowledge about algorithms.

I had the option to code in Python or Java. I set to work and solved the first problem in a couple hours. Each time I submitted a solution, foo.bar tested my code against five hidden test cases.

Once my solution passed all of those tests, I could submit it and request a new challenge. Over the next two weeks, I solved five more problems.

After I solved the sixth problem, foo.bar gave me the option to submit my contact information. I typed in my phone number and email address, fully expecting that to be the end of things.

Much to my surprise, a recruiter emailed me a couple days later asking for a copy of my resume. I emailed it to him, and we set up a phone call.

For his interview, Rosett spent a day at Google headquarters in Mountain View solving problems on a white board.

Though cynical at first, even crosschecking with other Googler friends if they had heard of such an innovative hiring test, Rosett got the offer within 2 weeks.

Three months after the mysterious invitation appeared, I started at Google.

Foo.bar is a brilliant recruiting tactic. Google used it to identify me before I had even applied anywhere else, and they made me feel important while doing so. At the same time, they respected my privacy and didn’t reach out to me without explicitly requesting my information.

Overall, I enjoyed the puzzles that they gave me to solve, and I’m excited for my first day as a Googler.

Well, here’s wishing this new Googler a great luck in the rest of his innings. What he’s probably already aware of is that this challenge was only the beginning of things to come!