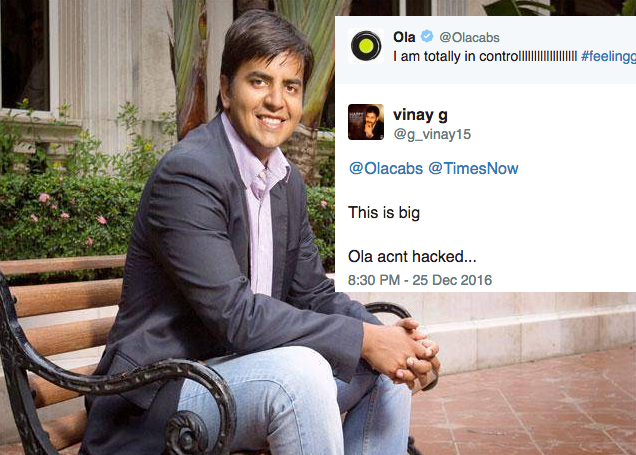 My dream is to drive, over the rainbow so highhhhhhhhhhh

Social media users would’ve immediately thought it was yet another hack – there has been a spate of hacks across Indian twitter recently, with prominent names such as Rahul Gandhi and journalist Barkha Dutt having their accounts compromised.

It even tried hitting on fellow startup Zomato.

It then tried to engage in friendly banter with Flipkart and Netflix.

Hey @Flipkart – lets put one for the road!

As time went on, the account slowly got a little more incoherent.

Social media users had begun wondering what was up – some speculated it was the work of an intern, and others commiserated with the social media manager who was inevitably going to be fired for a social media blunder.

@Olacabs: Get well soon man. Hope your team and management find the strength to forgive you ?

But it turned out Ola hadn’t been hacked, and an intern hadn’t had too much to drink on Christmas night. Around two hours after the initial tweet, Ola revealed that the series of tweets had been a hoax to raise awareness about drunk driving.

About those last tweets, drunk tweeting is dangerous, imagine what drunk driving can do. #PeekeMatChala pic.twitter.com/n5GbBlXuTw

This was social media done right – the using of the hacks was topical, and generated lots of buzz. Trolling your 83,000 followers  was brave, but hard hitting. And the campaign fit along with perfectly Ola’s core value proposition – cab aggregators are perhaps the best way to get home after a drunken night out this holiday season.

Here’s three cheers to Ola’s social marketing team for pulling off one of the strongest Twitter campaigns this year.