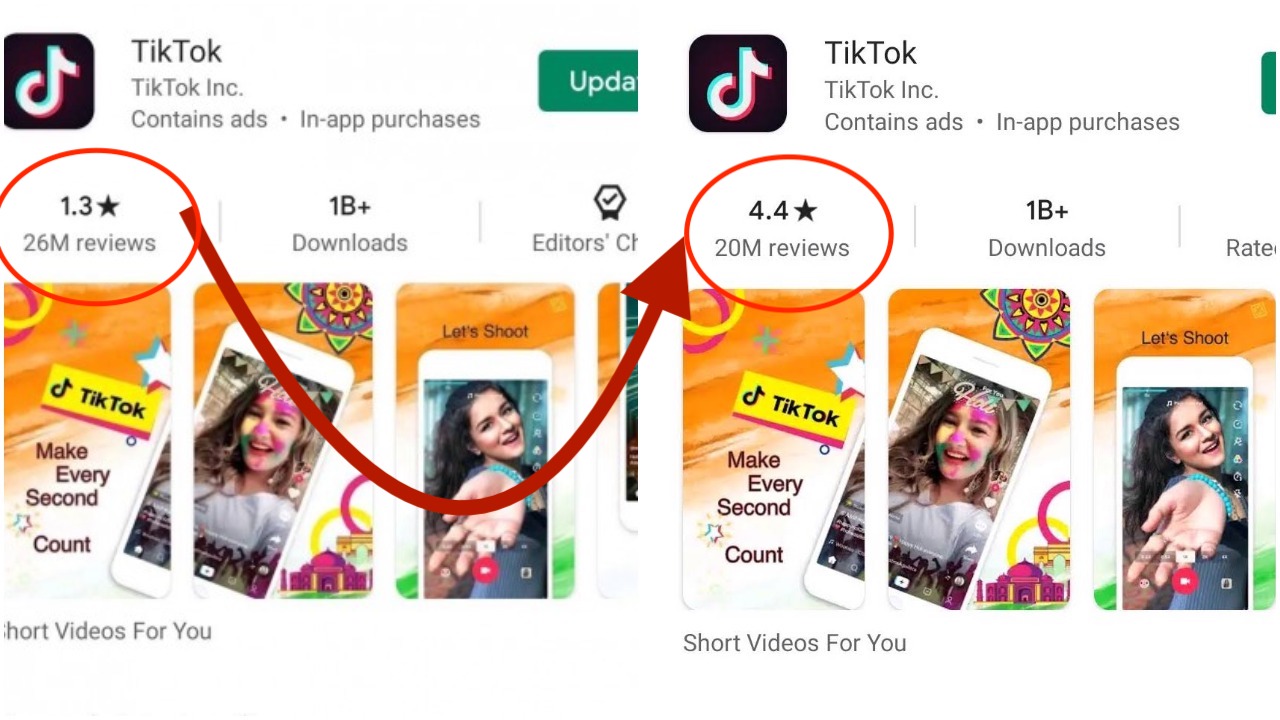 In what seems to have been a protracted operation by Google happening over the last few days, the Android parent has deleted upto 8 million low-ratings left by TikTok users on its app. Last week after an outrage after some of the problem content posted on TikTok emerged, users had hit it with thousands of 1* ratings and negative reviews, bringing down its original rating from a 4.4 star to a 1.1 star. As of today, the Tiktok rating on Playstore is back to being 4.4 again.

While there has been no public communication from Google about this, the ratings have jumped back up after at least 6 million negative reviews were deleted by Google. Tiktok had suffered an unprecedented outrage against its app when content exposing a viral video that purported to normalise an acid attack against a woman had been called out by the digiterati.  The user behind the video Faisal Siddiqui was immediately banned from the platform. But the action wasn’t enough for the thousands of angry people who also used the opportunity to expose various other kinds of problematic content on the viral video app.  Tiktok is regularly accused of being a hotbed for hosting content that promotes sexism, violence against women, animal abuse, patriarchy, religion based discrimination and fake news, amongst others. Its content moderation policies have been questioned.

Tiktok’s restored rating hasn’t been received well by the users who were up in arms against the app.  They are now accusing Google of having bucked under pressure to sell out to a Chinese media giant in a bid to gain its business – Tiktok has been heavily advertising its own platform as a viable advertising channel, on other social media channels like Facebook and using Google ads. Google on its part regularly conducts checks on unnatural surges and drops in ratings across its products. It recently took down over 75 million reviews on Maps that were of a malicious nature or otherwise violated its content policies. It’s possible that the sudden sprout of low ratings and negative reviews for Tiktok by users who had just downloaded the app seconds before leaving a review went against its quality policies and decided to clamp down on it. Google does proclaim on its website that reviews of a spammy nature would be acted against.

While a conflict of interest between a low rated app on the Android Playstore – owned by Google, and the advertising revenue – it could potentially stand to lose from the heavily-funded app cannot be ruled out, Google’s actions seem to be driven more by regular quality and content moderation policies rather than vested interests.

The section of users who had downrated the app understandably are not all too happy and are now rallying to reprise the #BanTiktokIndia movement. A user accused Google of being biased and claimed that while it hasn’t restored the now-deleted video of carryminati – the one that set off the whole Tiktok VS Youtube battle, it’s quickly and unethically acted in Tiktok’s favour. A tweet also highlights that the user Faisal Siddiqui has since created a new profile on the platform. While it remains to be seen how this Tiktok saga will play out, it’s clear that an app that has been escalated to a cult status thanks to its 280 million users in India, cannot afford to upset a large section of those very users. With a political mood turning against China since the Covid19 outbreak, and the Prime Minister’s appeal to support and endorse all things made-in-India, the Chinese-backed app may find itself on thin ice for a while.